HOK has designed a $230 million renovation and expansion of Phoenix Suns Arena for the Phoenix Suns (NBA) and Phoenix Mercury (WNBA). The Suns have labelled this modernization of the sports and entertainment arena, which opened in 1992, “Project 201: PHX Reimagined.”

“A lot of great things have happened here, and over the years the city has embraced the building and site,” says HOK Design Principal Bill Johnson, FAIA, who also worked on the design of the original America West Arena that opened in 1992. “We wanted to keep its essence while bringing it up to the level of a new venue that provides an amazing experience for all fans.”

About 70 percent of the project was finished before the start of the 2020-21 season in December, with the final phase ready in time for the 2021-2022 season. 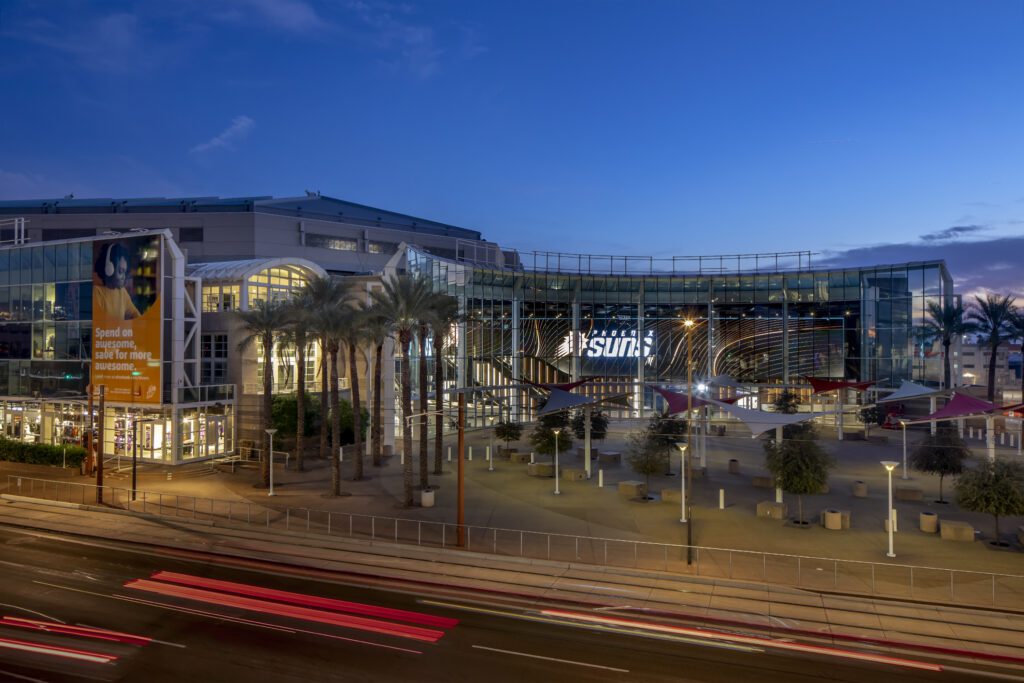 The Suns’ first decision was whether to renovate the arena, which was one of the NBA’s smallest and oldest, or build a new one.

The original facility had been designed as a basketball-first venue, with seats much closer to the court than those designed to accommodate hockey, which requires more space inside. Because fans could enjoy such an intimate experience, it remained one of the NBA’s best seating bowls for watching a game.

The arena sits on a prime location anchoring the southern edge of Phoenix’s Central Business District. A light rail system that opened in 2008 includes two nearby Valley Metro Rail stations. Across the street to the east is Chase Field, home to MLB’s Arizona Diamondbacks. The two venues share a parking structure.

When done right, adapting existing buildings for reuse is a more sustainable approach than demolishing a structure and constructing a completely new facility.

All these factors contributed to the Suns’ decision to save and revitalize the arena.

HOK’s design challenge was how to transform a compact building with low ceilings, tight concourses, minimal amenities (compared to modern standards) and an ageing infrastructure into a state-of-the-art, open venue that would provide an exceptional experience for all fans.

Before starting the project, design team leaders took Suns executives on a tour of State Farm Arena in Atlanta, where HOK had designed a nearly $200 million, “basketball-first” renovation that opened in 2018.

A 2003 renovation had added an air-conditioned glass atrium with views of the downtown skyline to the northwest side of the arena. Yet that project had not taken the next step and connected this space to the concourses.

To do this, the design removed one of the arena’s four primary stair towers and a concrete wall separating this lobby from the seating bowl. Fans walking into the Pavilion immediately experience clear views through the concourses all the way into the new center-hung scoreboard. 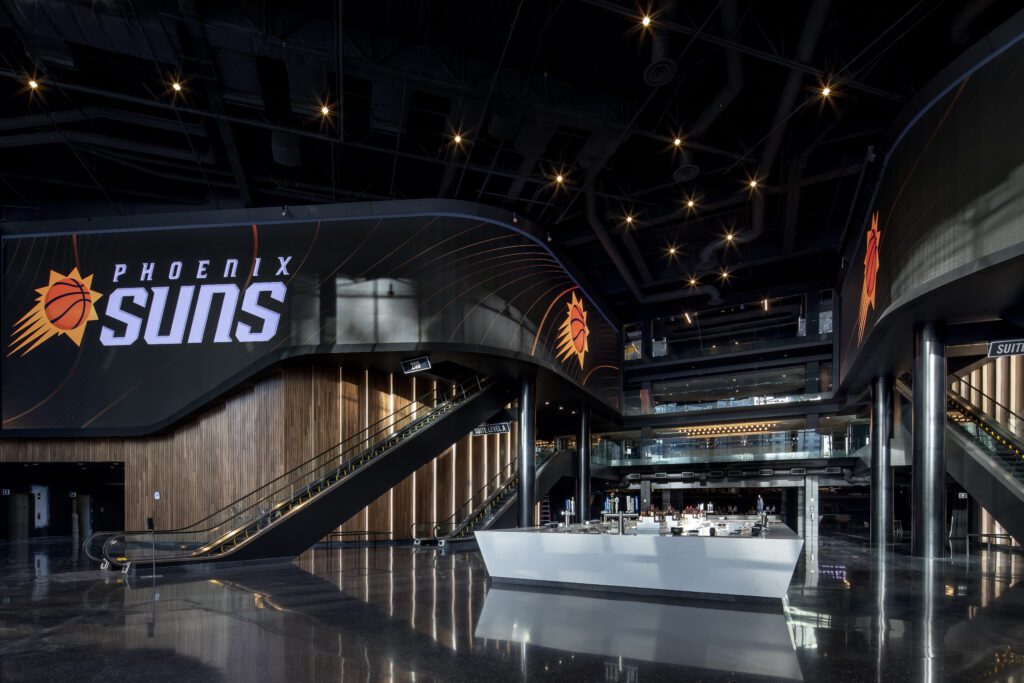 The Pavilion’s focal point is an 8,500-sq.-ft., interactive LED video wall that can be programmed with dynamic content for each event and to support corporate partners. In a marked change from the arena’s fortress-like feeling before the project, this video wall glows like a beacon and is visible from several blocks away.

Four new escalators in this Pavilion improve circulation to upper levels of the building.

Suns owner Robert Sarver has said that the large sports bar anchoring the pavilion, where fans can gather before and after events, is the “best sports bar in Phoenix.”

To feed off the energy of the fans, the Fox Sports Arizona broadcast booth now resides in this new heart of the arena.

The Pavilion also has a new entrance to the expanded Suns team store.

Opening Up the Concourses

Fans moving through an arena’s concourses want to get glimpses of the action on the court or stage.

To help fans feel more connected to the events, HOK’s design removed the seats in two corners of the lower bowl behind the stage. In addition to giving patrons views into the event and new scoreboard, this made the previously narrow main concourses feel much more spacious.

Two themed corner bars inside the seating bowl off the main concourse provide a new place for all ticketholders to socialize and take advantage of ‘Instagrammable moments.’

On the first suite level along the arena’s north side, the design has converted an existing club into a country-western bar with views down to the seating bowl and a stage that supports live music. Themed details include custom barstools made from horse saddles, a wall of whiskey barrels and decorative tin ceiling tiles. Fans access the club from an escalator in the new entry pavilion. 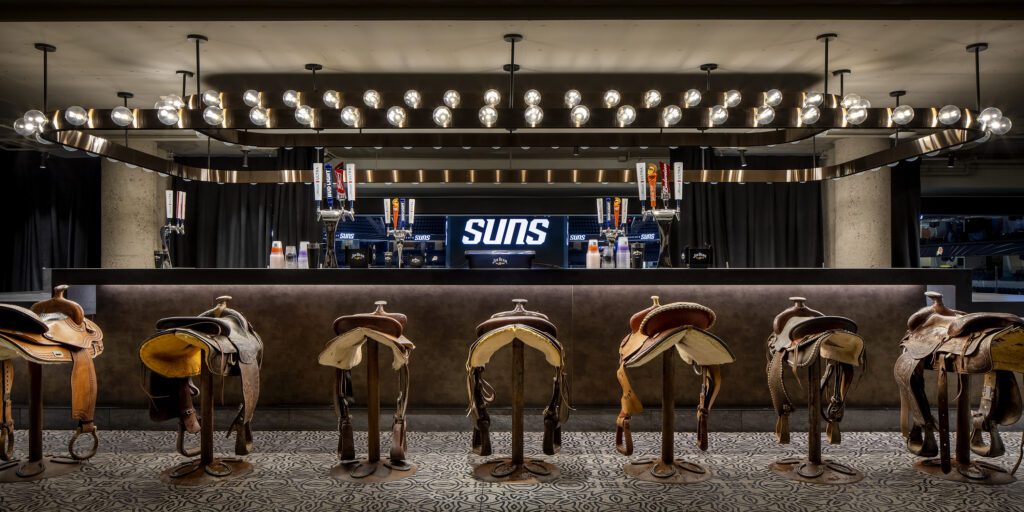 The original arena had two levels of nearly identical suites between the upper and lower seating decks. The renovation reimagines the seating bowl while adding a variety of new clubs, premium seating options, amenities and upgraded food service. To help make room for these new spaces, the Suns moved their practice court and 40,000 square feet of basketball training and operations space to a new standalone facility in Phoenix.

HOK’s design transformed what had been a practice court into a new event-level, courtside club called Club 1968 (the first year the Suns played in the NBA). This two-story, 7,500-sq.-ft. club has a large centre bar with a floor-to-ceiling video wall, hanging lighting fixture, DJ booth and dance floor.

Two new, identical 10,000-sq.-ft. premium clubs under the seating bowl on the east and west sides of the floor have direct connections to courtside seats. In the past, venues have typically used these areas for storage or back-of-house functions like star dressing rooms. In today’s arenas, however, this has become prime real estate.

The challenge was to turn this dark, concrete block-walled, basement-like space into a “shining jewel.” To achieve this, the design team created a festive, light-filled atmosphere with an upscale team store, copper-tiled wall, neon Suns logo and custom-made, gas-fired pizza oven clad in glittery coppery tile. The design seamlessly integrates the angled columns, beams, and sloped and irregularly-shaped (to accommodate the HVAC ductwork and cabling systems) ceiling. 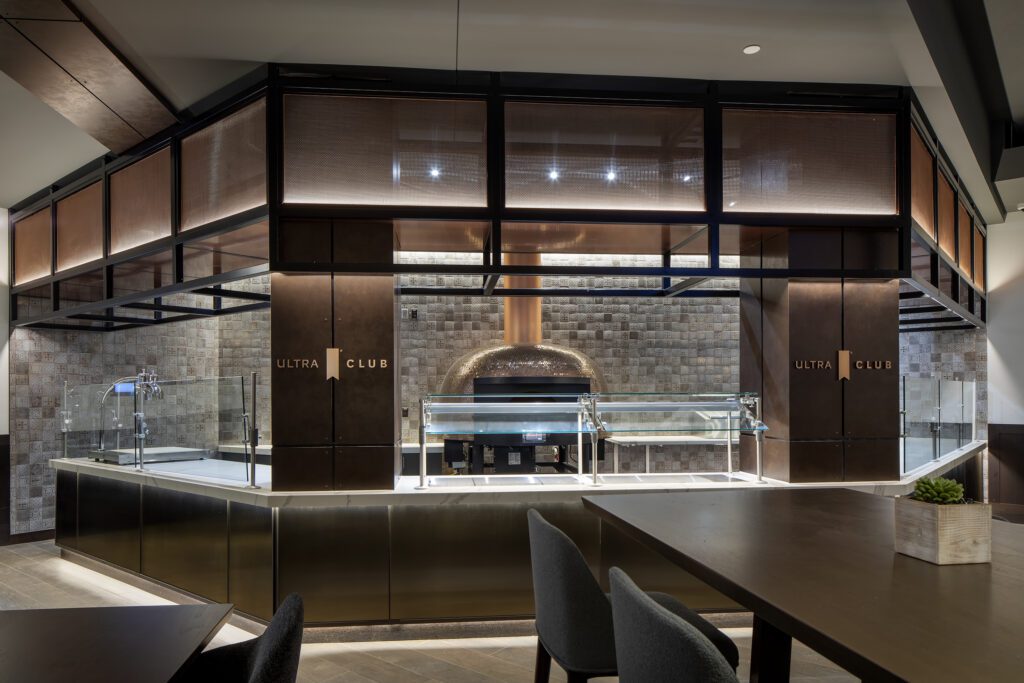 The modernization added three new VVIP ‘floor suites’ on the south end near the Suns’ locker room, where fans separated only by glass walls can enjoy up-close experiences as players move between the locker room and court. The associated seats are in the first few rows of the lower bowl.

A 15,000-sq.-ft., event-level commissary has been built on the arena’s south side to serve these clubs.

A new VIP entry and circulation corridor shifts the flow of club patrons to the lower level, easing congestion on the main concourse and creating a private premium entry experience.

Inspired by local food trucks and Airstreams, a new food court on the upper concourse offers a casual, festive environment that appeals to families. There is a real Airstream travel trailer, and each individual food stand is designed to resemble a shipping container.

New grab-and-go markets and concession stands throughout the venue provide an array of new food and beverage choices.

Upgrades to the Seating Bowl

A new 3,550-sq.-ft., high-definition centre-hung scoreboard is six times larger than the previous display board. The scoreboard’s completely digital content, which is all programmable, ties seamlessly into new LED ribbon boards circling the lower and upper bowls.

More than 15,000 brand-new larger and cushioned black seats, each with a cup holder, have been installed to replace the original plastic seats throughout the seating bowl. 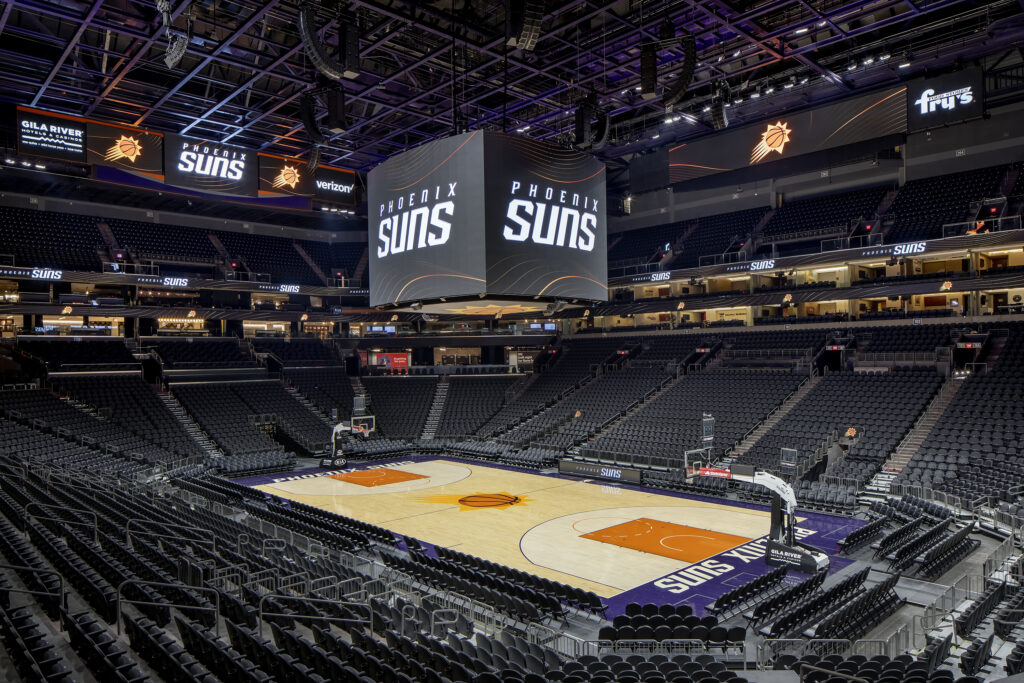 HOK’s renovation design incorporates a significant modernization of the arena’s infrastructure, including major upgrades to the mechanical, electrical, plumbing and structural systems. High-efficiency mechanical and plumbing systems reduce the venue’s energy and water use.

Concessions and restrooms have been refreshed with new graphics, finishes and fixtures. Concourses throughout the facility have been widened to increase circulation space. 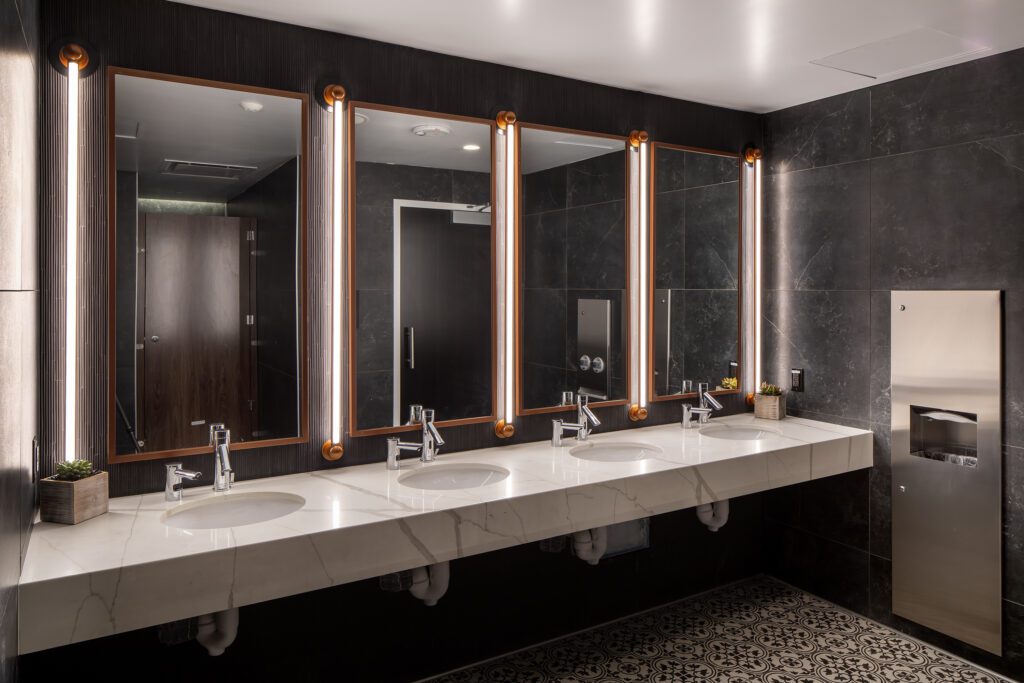 The project includes significant improvements to the sound, lighting and video systems, with more than 450 new screens installed in the arena. Technology upgrades include new 5G WiFi coverage for the entire venue.

The second phase of the project will renovate the arena’s upper concourse and the two connected suite levels.

The arena’s existing suites, which had all been similar, are being transformed into mini suites, theater boxes (smaller groups of boxes with shared dining areas) and all-inclusive party boxes with access to exclusive dining and lounge spaces. 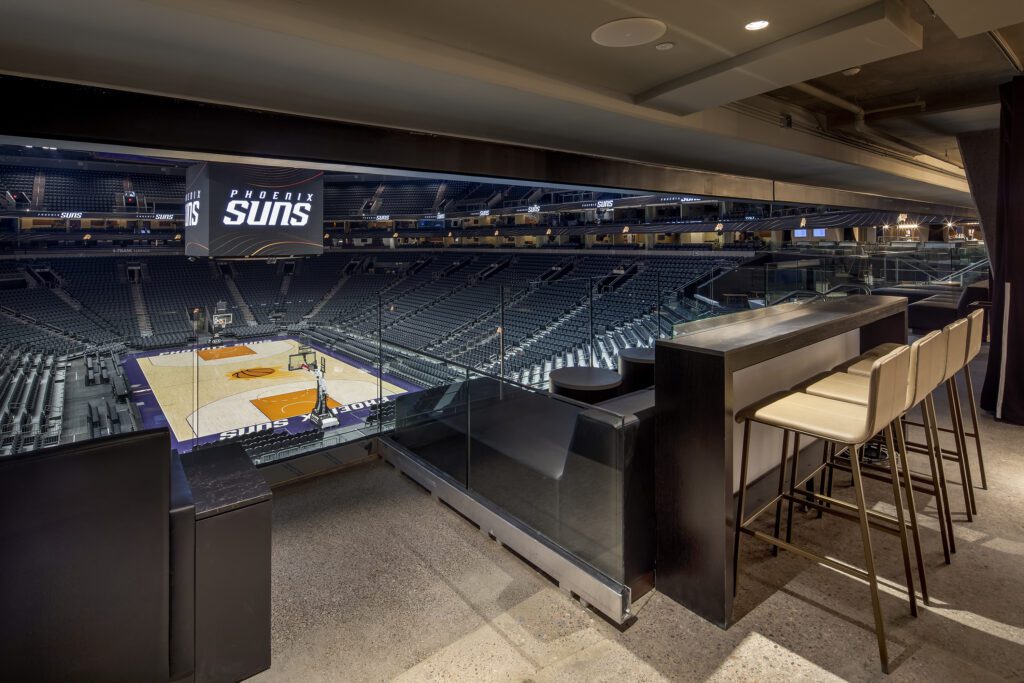 These upgrades will be complete before the 2021-2022 season.