Refined, evocative and emblematic; these are the adjectives to summarize the Gran Caffè Torino by the Puccio Collodoro Architects studio.

Placed inside an important historic building from the early 1900s, the Gran Caffè Torino is located near the central station of Palermo, at the corner of Via Roma and Via Torino, from which it takes its name.

The analysis of the context allowed us to develop a specific design concept, evoking the romantic style that characterized the neighbourhood in the early 1900s; in fact, its peculiar language has been conceived to recall the soft forms of the Liberty style, emphasizing the verticality that characterizes the rooms.

The choice of materials, shapes and colours is, therefore, the result of the explicit desire to recreate an elegant city lounge, where residents and tourists could perceive the quality of the products, finding themselves in an evocative and original location worthy of their name. The use of the micro-perforated sheets in pastel green that run through all the rooms seems to recreate the parapets above the counter, certainly becoming the common thread of the project. The same sheet is applied in the antique pink variant on the back wall of the tea room, emphasizing the logo positioned above and acting as a head element.

The design intervention takes place in four main rooms, besides the large technical surfaces, for a total of 190 square meters, clearly defined by the load-bearing structure, which is singular in its kind. This is in fact one of the first architectures built with a structure made of load-bearing bricks and a ribbed concrete floor. The particularity lies indeed in the important height inside the rooms, which has been deliberately emphasized with the use of vertical geometries visible also from the outside thanks to the large windows in all the rooms.

The entrance area is strategic because of its corner position, which allows you to perceive the entire space from a single point of view. Proceeding from the checkout area you will arrive at the pastry shop characterized by a prominent display counter with a totally visible laboratory behind it. From here you get to the last large room used as a tea room and characterized by a geometric composition of micro- perforated sheet metal elements that frame a small display and the lighting system.

The back wall is emphasized when seen from a specific perspective where the two large windows contrast with the soft geometries of the metal elements and ends with the large back wall where the logo, also conceived with the soft shapes present in the entire intervention, dominates the large curved panels in antique pink. 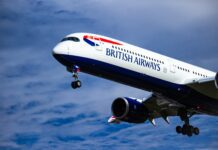 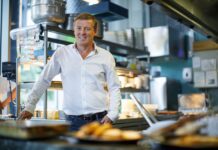